Scroll Down for an Online Tour of the Casino
"

Use the menu below to navigate the Casino or simply scroll down. Click on the floor plans to see larger versions.

See Inside with Google

An interactive tour of the interior of the Casino is also available; click on the image to access. Captured for FDR Media by Declan Clancy in spring 2016. 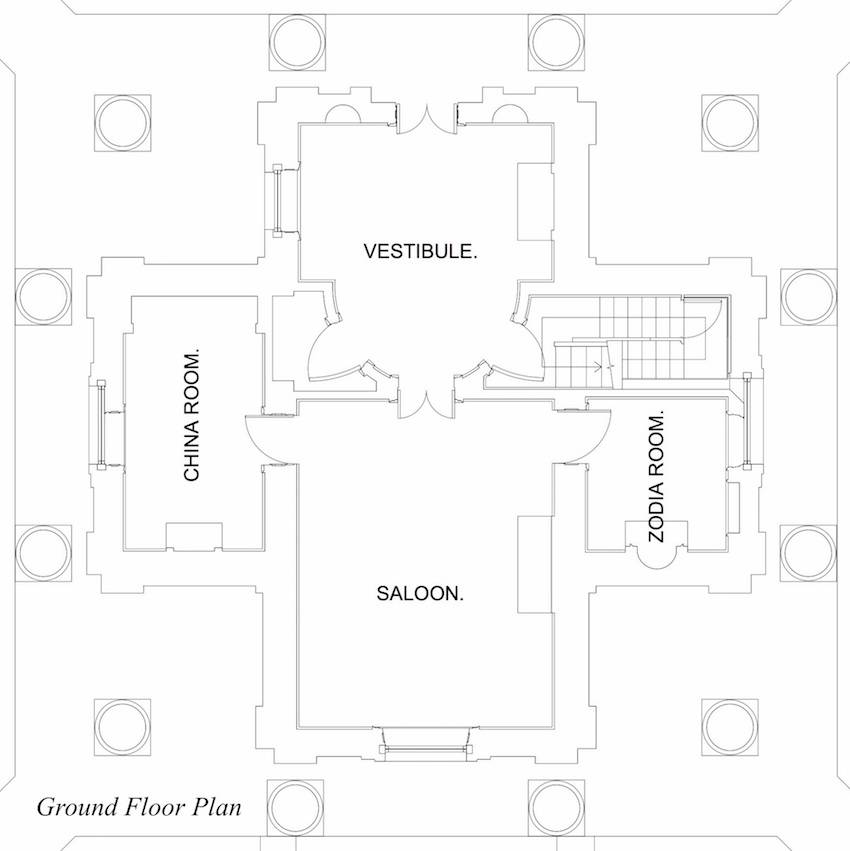 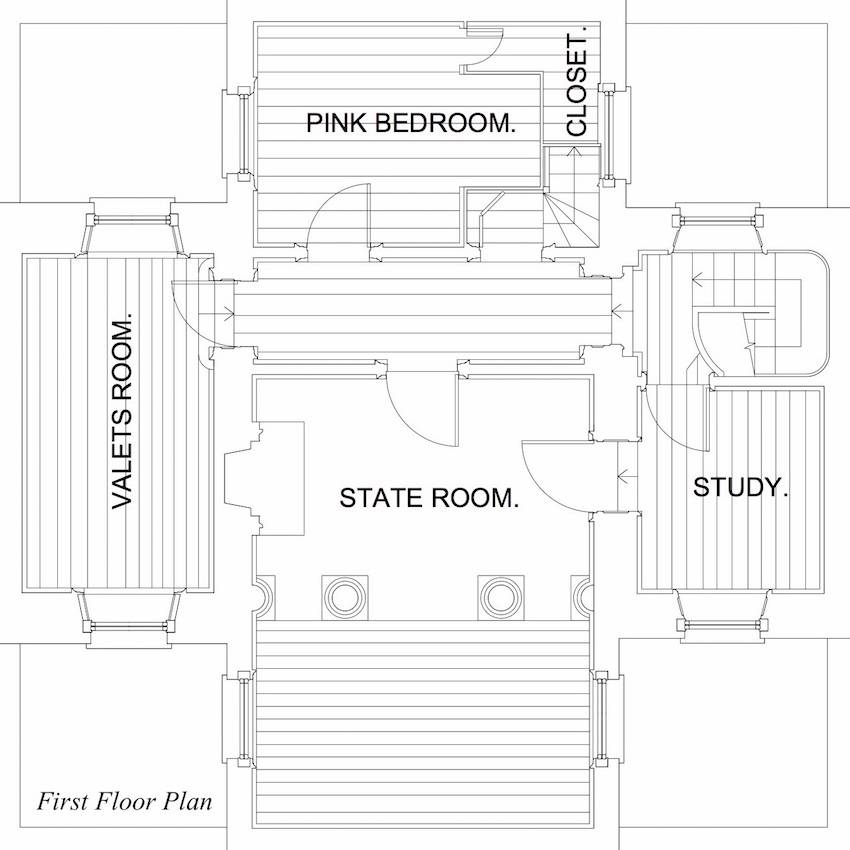 This ten-minute video tour of the Casino, given by guide Kevin in the costume of an Irish Volunteer, was recorded by Near TV for Culture Night 2012.

The practicality and the beauty of the building are intertwined. The first place we see this is in the Pantry. There are twelve Doric columns around the building, which are identical to look at. However, four of them are hollow, and drain water down from the flat roof. Bronze chains originally carried the water down, but modern pipes are in place now. An example of one of these hollow columns can be seen here, with its curved, fitted door in the back.

The Pantry is also the only room at basement level to contain a door to the outside (the main door is opened from the passageway). Its location close to the long tunnel means that it was probably used as a route from the Casino to the tunnels opposite.

From the front steps of the Casino, an idea of its original landscaped context can be glimpsed. Sheep grazed peacefully across the parkland that surrounded it. Stepping down and viewing the Casino from the ground below the front door, you can really see how it appears as a one-room temple from the outside, with a floor plan in the shape of a Greek cross. The windows are cleverly placed, and the stairways and floors that cross them disguised. From this angle, and by walking around the exterior, the statues can also be seen. At the front of the building stand Ceres and Bacchus, and at the back are Apollo and Venus. These represented the enjoyment and abundance that was intended for the Casino. The urns on the roof (disguised chimneys) can also be seen from this angle. The lions that guard each corner are Egyptian in style.

The exterior of the large front door was made from Irish oak. Chambers’ written instructions were to leave it to age naturally, so that it would eventually turn silver and blend in with the Portland stone which surrounded it. Walking back through this door shows very clearly the contrast between the exterior and the interior scale of the building. Only part of the door opens, and it looks very different from inside the Vestibule.

The inside of the great front door is significantly smaller than its outward appearance, and is made of rosewood mahogany. A rope which hangs down from just above this door shows the concealed window above it, which was pulled down to cover the entryway and let extra light into the room. A number of other tricks are used to make this tiny entrance hall seem much larger than it is.  The curved walls, the Pantheon-style domed ceiling, the use of a false door, and the all-white colour scheme all added to the sense of space.

The plasterwork in this room shows classical motifs of agriculture and culture. Musical instruments are especially prominent, such as the lyre of Apollo. In this room is displayed a portrait of James Caulfeild, the 1st Earl of Charlemont, with the Casino just visible in the background. Also on display is the Greek stele which once formed part of the collection the Earl displayed here. 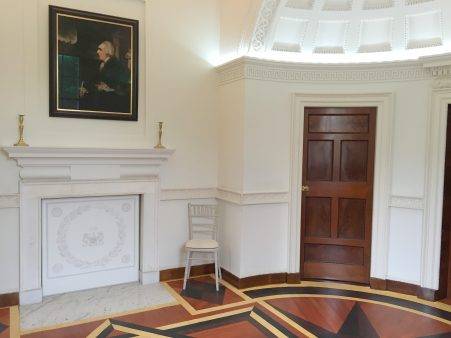 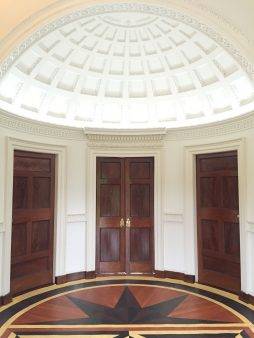 This is the main apartment of the Casino. In 1769, Charlemont wrote to Chambers and recommended that “…the Entablature, doorcase etc of the room should be dead white touched with blue and that the cove parts of the ceiling… be of a more brilliant white.” The colour scheme of the room was related to the ornaments it once displayed – primarily the 12″ by 5″ carved slab of lapis lazuli on the marble chimney-piece. Across the room was once a table with a matching lapis lazuli top.

The centrepiece of the ceiling is the face of the sun-god, Apollo, echoing the sacrificial fire and smoke-hole that would have formed the centrepiece of a real Greek temple. There appears to be only one door in this room – the one leading in from the Vestibule – but two gib doors (doors disguised as part of the wall they are set into) hide in the two north corners. Each leads to two more rooms – the west to the China Closet and the east to the Zodiac Room.

This room also functions as the library, and shares the eastern arm of the Greek cross plan with the building’s main staircase, so the size of the room is very small. The window shows how this staircase is hidden from the outside; from the inside there are twelve panes of glass, whereas from the outside, there are thirty. The ceiling features a large dome, around which appear the symbols of the zodiac. A century ago, these symbols were painted black, and the interior of the dome was painted with the constellation of the night sky, as it had appeared on the night of Lord Charlemont’s birth (the 18th of August 1728).

A letter from George Montagu to Horace Walpole in 1761 said that “I have been to see Lord Charlemont’s collection. He has some charming things that would merit a show even at Strawberry. His medals are very fine, a charming Titian of Borgia, two Carlo Marats, a Claude, two fine vases, a Queen Elizabeth, a lion’s skin of yellow that serves for a veil, a brave collection of books, etc.”

This room occupies the western arm of the Greek cross. It was originally intended as a room that displayed miniatures and busts of Charlemont’s friends – people such as Swift, Grattan, Flood, and Fitzgerald. It has been known as the China Closet since the nineteenth century, when the second Lady Charlemont used it. She added to the decoration of the room, particularly with the Victorian stucco of interlaced vines. The ceiling and cornice survive from the original scheme. The cove of the ceiling displays agricultural symbols.

The second Lady Charlemont was born as Anne Bermingham, and she married Lord Charlemont’s son, Francis, in 1802. She was a wealthy heiress, which allowed Francis to maintain the Marino estate after the great debts he had inherited on the death of his father.

All of the upstairs rooms suffered during the Casino’s period of dereliction, as the flat roof had fallen in. Therefore these rooms may have once been more highly decorated than they appear today. However, at the end of the landing, above the main staircase, is an exuberant shell design in eighteenth-century plasterwork, which may give an idea of how the rest of the cornices and covings looked during the building’s original period.

There is a small stairs behind a cleverly-hinged door on the landing, which leads up to the roof of the Casino. The roof was a very popular place to visit during the eighteenth and nineteenth centuries, due to the extravagant views it afforded down across the peaceful meadows to the seashore. Lord Charlemont likened this view to the Bay of Naples, and the peak of the Sugarloaf in the distance to Mount Vesuvius. 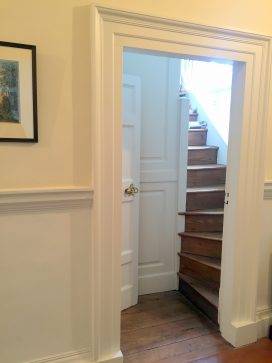 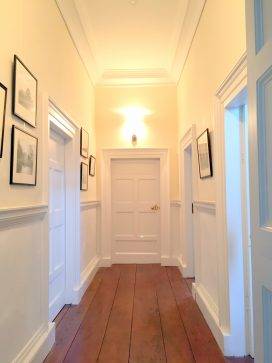 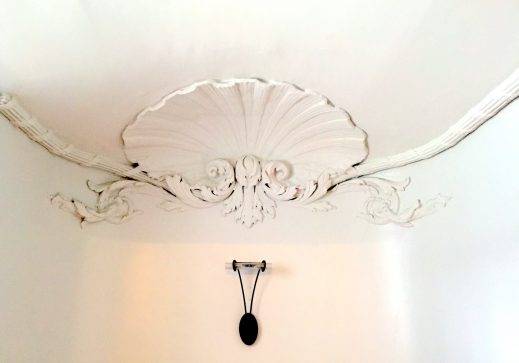 This magnificent, although diminutive, bedroom was recreated from a state of ruin during the restoration period. Bits of columns, gold decoration, and the blue paint colour, were found in rubble on the floor, and the modern restoration matched painstakingly with these samples. The feet of the original bed were also found, and are on display in the anteroom attached. It was a type of chaise longue.

The extravagance of this room is in contrast with the restraint and understatement of the below rooms, and it has been suggested that Chambers did not have a hand in its design. There are no documented connections between Chambers and the top floor at all, and it is possible that when he ceased his work on the project (due to late payment of bills), it was intended to have just one floor above the basement level. On display in this room are Chambers’ original drawings for the Casino project, as well as some views of the estate in the nineteenth century. 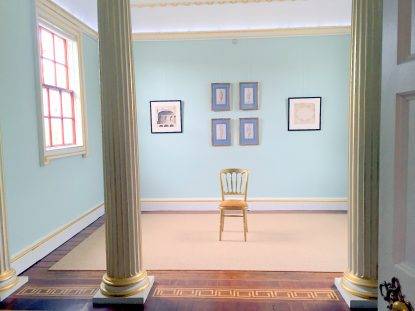 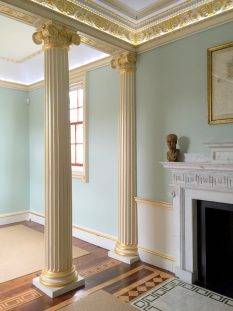