The Casino and Open House Dublin 2022 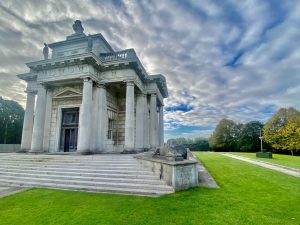 In 1746, James Caulfield aged 17, already named Lord Charlemont, set off on a Grand Tour with tutor, companion and apparent alchemist Edward Murphy whose intention was to turn the wild-child into a learned man along the course of the next nine years in England, The Netherlands, Italy, Turkey, Egypt and Greece. Charlemont’s procession of writers, painters, companions and lovers witnessed first-hand his development into a young man of potential.

Upon return to Ireland, at the behest of his stepfather Thomas Adderley who had acquired a piece of land for his stepson in Donnycarney, James fell into melancholy until it was decided the solution to having to live in one country while his heart belonged to another was to build Italy and all the memories of his Grand Tour in his back garden and so began the rise of the Marino demesne.

That back garden, by the 19th century, had grown to 300+ acres. Today, all that remains is Ireland’s finest neoclassical building designed by William Chambers to resemble a one-storey, one roomed Greco- Roman temple were you would honour the gods like Ceres and Bacchus who currently hold dominion from the roof above the four Egyptian lions, winged satyrs, ox skulls and mysterious twin-tailed merfolk perched on the roof’s two urns.

However, all is not as it first appears at the Casino, no longer in Donnycarney but remained Marino after a town outside of Rome. Here, we have a building that equally celebrates the past and yet astonishes the present with its secrets. One of those secrets is the presence of sustainability at work within four of the twelve Roman Doric columns that surround the building. These four columns are hollow on the inside and since 1759 have been taking rainwater from the roof, down through their hollow centres and on down through four more hollow columns in the basement until they end up in an underground reservoir where, in the 18th century, this rainwater was reused as dishwater by the kitchen staff.

Designed by Sir William Chambers for Lord Charlemont, the 1st Earl and 4th Viscount of Charlemont, the building not only demonstrates the appearance of sustainability in the 18th century but how design and detail can be astonishingly deceptive.

A visit to the Casino shines a light on the many architectural secrets of this Greco-Roman temple that actually comprises of sixteen rooms spread out over three-stories. Formerly an enviable estate, the Marino Demesne, which was unusually open to the public, included Lord Charlemont’s country house Marino House, a mini gothic cathedral, wandering festooned rams, multi-horned Jacob sheep, peacocks, swans and a 5-walled garden with a hothouse and hypocaust heating system which enabled the importation and growth of exotic vegetation previously impossible to cultivate in Ireland. One of the most famous products of the Demesne was its prize-winning pineapples.

Discover the Casino, Marino, in Dublin, where sustainability and a taste of the exotic have been in place since 1759. 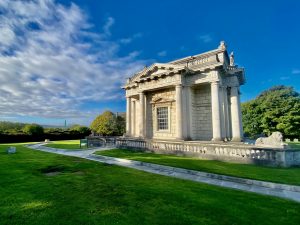